Steve was 66 years old when he came to our office with right shoulder pain of 10 months’ duration.

The pain began without injury and had become progressively more frequent and intense. At the time he came to our office he felt the pain any time he raised or tried to lift something with his right arm.

He stated at the time that even lifting his coffee cup out of the microwave caused him pain. He had been taking Ibuprofen daily but had no medical treatment to date. Steve had been involved in painting as a hobby but had all but quit due to the shoulder pain it caused. 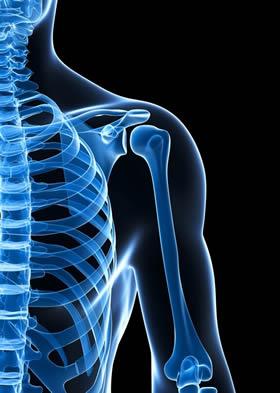 Examination revealed the right shoulder to be higher than the left, with notable tightening of the right upper shoulder and neck muscles. Neck range of motion was limited due to muscle tightness. Shoulder range of motion was moderately limited with pain when reaching up, reaching out to the side, and reaching across his body. Muscles of the arm and shoulder were intact and were strong except where inhibited by pain. A grinding feeling was noted with palpation of the shoulder joint during motion. Spinal joint fixation/dysfunction was noted in the upper neck and lower neck/upper back regions. Muscular trigger points were noted in the upper shoulder and mid-scapular muscles on the right.

Evaluating the movement of the patient’s shoulder revealed that he had developed a compensatory movement pattern that was likely to perpetuate the condition. This would explain the tightening of the associated muscles and elevated position of the shoulder. Shoulder X-rays revealed early degenerative changes in the shoulder joint, but nothing of clinical relevance in this case. Neck x-rays revealed moderate disc degeneration at the C5 and C6 level and a complete loss of the normal curve. No other significant medical findings were noted.

Our team diagnosis was Tendonitis and Bursitis caused by shoulder joint impingement. Many in the medical field refer to this as Impingement Syndrome. When structural and/or mechanical alterations are present in this area, impingement of some of the delicate soft tissues can occur between the upper arm bone and upper bone of the scapula. These include tendon, bursa, and blood vessels. In this patient’s case, structural changes of the shoulder were not the issue, but altered function was. In order to correct the problem, we needed to develop a plan to help him with his pain immediately, but correct movement and function in the long term.

Steve was very dedicated to getting well and followed all of the prescribed treatment. At the completion of his treatment, he had full use of his shoulder with no pain. He elected to take updated x-rays of his neck, which showed that the curvature in his neck had also returned. This is important not only for shoulder function, but also function of the spine and nervous system.